Desugaring - taking our high-level language and simplifying it!

Just give me the code!

All the illustrative code snippets in this blog post link to the respective file in the Bolt repository. There’s more code in there than could be covered without making this post extremely long!

The first half of this post will be looking at the desugaring/ folder and the second half is covering the ir_gen/ folder.

Programming languages are a series of abstractions. No one writes programs by typing in 0s and 1s - it’s just not human readable. The closest we get to the hardware operations is with assembly code e.g. series of add mov and jmp instructions.

Assembly code is still not really a pleasant programming experience. Even languages we deem as low-level like C / C++ / Rust offer a host of abstractions over assembly code - things you take for granted like if statements and while loops.

We call these abstractions syntactic sugar - named because they make it sweeter for programmers to program in that language.

When we’re writing a compiler though, we’re going the other way - we’re desugaring the source code - stripping away higher-level constructs. We also refer to this as lowering the high-level language constructs.

In this post we’ll start by looking at desugaring a for loop. We’ll then look at the “Desugaring” and “IR Lowering” stages in the Bolt compiler frontend. This will wrap up our compiler frontend and set us up to switch to C++ for the compiler backend.

The first case we desugar is actually between the parsing and type-checking phases - desugaring a for loop into a while loop:

Note we handle this as a special case when type-checking the expression, however you might imagine if there was more sugar (like ++i instead of i:=i+1) that we might add a full desugaring stage between the parsed AST and typed AST:

Desugaring gets its own stage in between the two stages of type-checking. The data-race type-checking is much more complex than the traditional type-checking (int, bool etc), so we simplify the language to avoid having to consider as many cases.

For example, consider variable shadowing, where we can declare the same variable name x in nested scopes: Consider the following:

Variable shadowing is syntactic sugar - we don’t require the programmer to use unique variable names in nested scopes. It makes the alias liveness analysis previously discussed much harder. How do we know which value of x is being aliased? We could track which scope we’re in orrrr we could avoid it. It’s much easier to deal with once we give variables unique names:

We first create a mapping from old to new variable names. We count the number of times the variable has been declared so far in outer scopes and stick that count on the end of the variable name. And to specify that these are compiler-generated names we prepend them with an _, since in Bolt programmers can’t define a variable starting with an _.

Function overloading is where we define multiple functions with the same name but different parameter types. This is useful if you want to call a different print method based on the type of the arguments passed in:

Again, this is a nice-to-have construct, but we’ve got an issue - which function do we call? We can’t tell from the source code, but we can use the information about the argument types from the previous type-checking stage.

We encode the type of the parameters in the function application expression when type-checking it:

We’re going to take the approach used in C++.

For each of the primitive types, we can map them to a unique single character, whilst for classes we map them to the class name prepended with its length. We then concatenate all param types together.

Why prepend the length? Consider param types (Foo x, Bar y) and (FooBar x) - both would map to FooBar if we concatenated their parameter names. Only when we prepend the lengths can they be distinguished - 3Foo3Bar vs 6FooBar.

And then to name mangle a method or function, we have the following code:

If you look at the master branch of the Bolt repo, you’ll notice the desugaring stage also desugars generics. That’s a topic that deserves its own post later in the series!

IR stands for intermediate representation - it is simpler than the source code, but not quite lowered all the way down to assembly code.

Our goal with this IR is to get close to the LLVM representation, to make working with the LLVM API as simple as possible. We’ll also strip away any unnecessary information that we won’t need when running the program.

Classes are an abstraction that group together fields and methods. LLVM IR doesn’t contain classes and objects, only structs, which are just a group of fields. 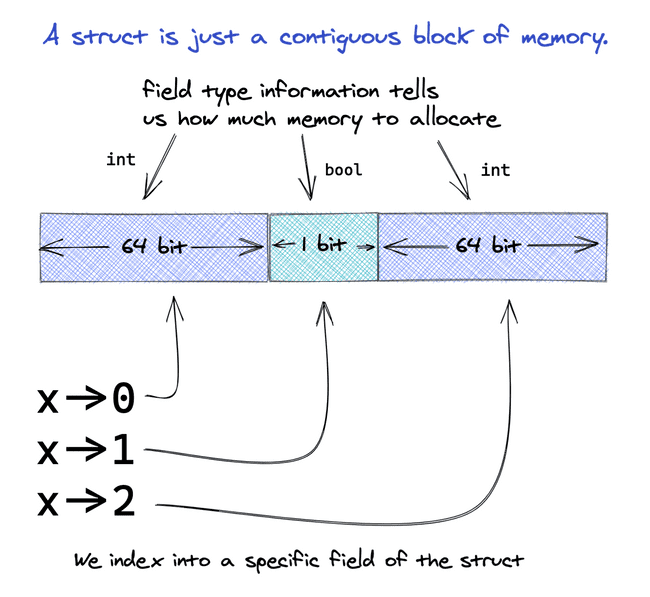 So how do we map from our Bolt class definition to a struct? We strip away information from our class:

Recall, the goal of annotating types and capabilities to our AST is to check the program is correct. If we can assign a type to an expression, then it is well-typed so it satisfies our notion of correctness. Likewise, if we can assign capabilities then we know our program doesn’t have data races. And const is just a compiler check to prevent us reassigning a field.

Once we’ve checked all that, we can drop that information, since we don’t need it later in the compiler. In fact, our class definition is now quite barebones - just the class name (a string), and a list of field types, which LLVM will use to decide how much memory to allocate to an object:

Field names are useful to us as programmers, but for the computer we don’t need to name our fields, we can number them instead as an index into the struct. Intuitively this is just like array indices.

Note this List.find_mapi_exn function name might seem complex, but the goal is to find the field that matches the given field name by going through (map) each element of the list, along with that field’s index (hence mapi not map), and raising an exception (exn) if it is not found. In practice, this function will never raise an exception because we already have checked in an earlier type-checking stage that the field exists.

Note we need to name-mangle our methods again, by prepending the class name. Right now, we have unique method names within a class, when we separate them as normal functions, they need to be globally uniquely named. 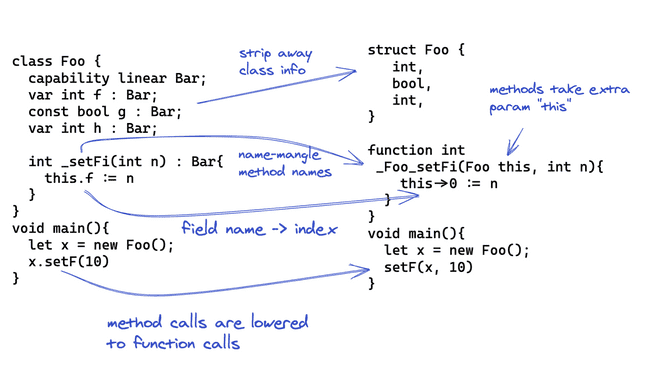 Bolt has a locked capability, which is similar to the synchronised keyword in Java - this wraps locks around any access. Since we’re dropping this locked capability we need to specify lock/unlock instructions in our IR.

and our to insert locks, we lock the object (this) and then compute the return value, release the lock and return the value:

The corresponding generation code is:

And for the identifiers, if we’re meant to lock them, we acquire a Reader/Writer Lock depending on whether we’re reading from them or assigning a value to them:

Wrapping Up Our Compiler Frontend

As mentioned in the previous parts, the Bolt repository also contains code for other language features (inheritance and generics, coming in a later post). So don’t worry about “vtables” mentioned in the ir_gen/ folder. To see a simpler version of the repository before these features were added, run git checkout simple-compiler-tutorial.

We’ve now wrapped up our discussion of the compiler frontend!

Next we’re going to be switching from OCaml to C++ for the LLVM IR Code generation. To do this we’ll be using Protobuf, a cross-language binary serialisation format.

Once we’ve done that, in a couple of posts we can talk about LLVM’s C++ API!