A tutorial on liveness and alias dataflow analysis

In the previous post in the series, we looked at how type-checking the core language worked. This analysis is flow-insensitive - it does not depend on the flow of the execution of the program. If an expression is of type int then it will have type int regardless of what was executed before or after it.

Some program properties do however depend on the execution path taken by a program. Dataflow analysis tracks how a particular value might propagate as the program executes.

For example, a value might alias - you could have multiple references pointing to that value. Whether two references x and y alias can’t be determined by looking at their assignments in isolation - we need to track the execution to determine if they have the same value assigned to them.

Another example is liveness analysis - we say a value is live if some point later in the program it could be used, and dead otherwise.

Why do we care about alias analysis and liveness analysis? Well it turns out that Rust’s borrow-checker uses a combination of these to determine when a reference is borrowed. Bolt has a linear capability in its type system which acts the same.

Both Rust’s borrow checker and Bolt’s capabilities prevent data races - an explanation why is in my dissertation.

In a nutshell, Rust works on the principle of ownership: you either have one reference (owner) that can read/write (a mutable reference) or you can borrow (aka alias) the reference.

To enforce this we care about 2 things:

Let’s elaborate on that second point. When is a reference borrowed? The first version of Rust’s borrow checker said this was whilst an alias was in scope.

That means we cannot reassign x in the example until y is out of scope. This is a “lexical lifetime” - y’s borrow lifetime is determined by its lexical scope. So that means x can’t be reassigned, since it is borrowed at that point. But y isn’t being used so surely x isn’t still borrowed?

That’s the idea behind non-lexical lifetimes - the borrow ends when the value of y is dead - i.e. it is not being used.

In Bolt, we’ll be tracking the lifetimes of references to objects.

Let’s get implementing it!

The first step is to determine when two values alias. How do we know two references will point to the same object without actually executing the program?

We use abstract interpretation.

Implicit in this is a set of rules for how the program will execute, we call this its operational semantics. We will not go into details here, but it’s things like:

When do we have aliasing? When a new variable is declared or when it is reassigned. For simplicity (and also because we don’t want the lifetime of the alias to be larger than the original value) we will not allow aliasing via reassigning an existing variable (e.g. x := y).

So we care about expressions of this form:

The expression e can reduce to a value when executing e.g. 1+2 reduces to 3.

If when executing e it reduces to a reference y, then the overall expression would look like:

And so x would alias y. So let’s write a function that, given an expression, will return the list of identifiers that it could possible reduce to. That’ll tell us what x could possibly alias.

We’ll store this helper function in an “environment” of helper functions used in the data-race type-checking stage of the Bolt compiler: data_race_checker_env.mli

The type signature of this OCaml function is as we’d expect:

A reminder of the type of expr defined in the previous post - loc encodes the line number and position of the expression - used for error messages.

We can continue doing this for other cases. But what about an if statement? Does this expression reduce to x or y?

In general, without actually executing the expression, we don’t know. So we’ll have to approximate.

Let’s remind ourselves of our goal - to mark a value as borrowed/not linear (Rust / Bolt equiv. terminology) if it is aliased. We’re trying to eliminate data races, so we have to be conservative - assume it might be aliased even if it isn’t. The worst thing would be to let a data race slip through. Abstract interpretation always errs on the side of soundness.

So we’ll overapproximate the list of possible identifiers the expression could reduce to - we don’t know which branch so we’ll count the identifiers from both branches.

In the expression below, we would also run abstract interpretation (simple in this case) to find that z and w are aliases of y.

By transitivity, z and w must also be aliases of x. 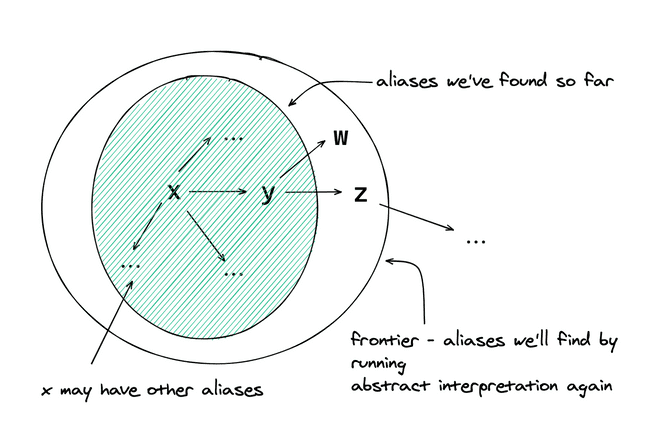 So we repeat, until we find no more aliases. The full code is linked in the repo, and includes an option of matching fields (i.e. should we consider aliases of x.f as well as x?) We won’t in this case, but other aspects of Bolt’s data-race type-checker do use this.

But the beauty of functional programming is that the function says what we’re doing with no boilerplate:

Alright, so we’re halfway there - we’ve identified our aliases, now we need to find out when they’re live. Remember a value is live if there’s some program execution path in the future it will be used on.

To do this, let’s formalise the notion of “execution paths” in a program. We’re going to be representing a program as a graph of instructions, with edges representing the steps in the execution. We call this the Control Flow Graph of the program.

However, if every statement represented a node on the graph, with edges between them, the graph would be incredibly large (a 100 line program would have 100 statements). We can be a bit cleverer and group together statements that will always execute right after each other.

If there’s only one path from the start statement to the end statement in a group of statements, we can represent this as a single node in our control flow graph. We call this node a basic block of statements. Below you can see the lines of code highlighted in different colours to show which basic block they lie in.

In our graph, we can pick any statement in the program and ask, is the value of variable y live at this point?

A naive way of checking this is to traverse the graph forwards until you see a use of this value of y (so y is live) or until you reach the end (you therefore know y is dead). But this is hopelessly wasteful - for every statement we have to go forward and traverse the graph to check if the variable’s are used.

We can look at it another way, if we traverse backwards, then the first use of y that we encounter is the last use if we traversed it going forwards. So as soon as we see y being used when we go backwards, we know that whilst y is defined, it is live.

A picture helps so let’s look at our graph:

So to summarise, in liveness analysis we:

Now we have our theoretical understanding in place, let’s implement the checker.

Whenever we encounter an identifier, we need to know what the original object reference was, the set of possible aliases, and separately those that are live.

Our function deals with three cases depending on the identifier name:

In the first case, we want to filter the linear capabilities (since the reference is not linear so can’t use them) if there are live aliases. Along with the updated identifier, we also return the unchanged set of live aliases.

And the dual in our type_alias_liveness_expr function is when we see our let x = e expression. Here, remember we execute e first, and then assign it to x, so when traversing this backwards, we remove x from the set of live aliases first (since we’ve seen its definition), then we traverse the bound expression:

One interesting case in our Control Flow Graph is the if-else split. We treat each branch independently of each other, since they are independent paths in our graph.

How do we recombine the two branches? Well, the definition of liveness is if there is some path in which the value is used. Again, we don’t know which branch is taken, because we can’t execute the program, so we over-approximate - we assume both paths could have been taken - so union their sets of live aliases, when traversing the if-else condition expression:

Another interesting case is when we have a while loop. We can’t just traverse the loop once, since we might miss out on some values that could be used in a subsequent iteration and therefore are live. We don’t know how many times we’ll go round the loop so as ever we over-approximate - we’ll keep going round the loop until the set of live aliases doesn’t change (i.e. we’ve got all possible live aliases):

Email subscribers get exclusive access to the latest posts first!

Where does this fit into Bolt?

Our liveness analysis fits into the overall type-checking for linear capabilities in Bolt’s data-race type-checker:

We’ll talk more about the other aspects of data-race type-checking later, however the next stage of the tutorial is on desugaring - the process of taking our high-level language and simplifying it to a lower-level representation. This will set us up nicely for targeting LLVM later in the compiler series.