Implementing Concurrency and our Runtime Library

The Role of a Runtime Library

Up till now, we’ve translated constructs in our language Bolt directly into LLVM IR instructions. The biggest misconception I had with concurrency was that it worked in the same manner. That there was some spawn instruction that compilers could emit that would create a new thread. This isn’t the case. LLVM doesn’t have a single instruction to create threads for you. Why not, you ask? What’s so special about threads?

Creating a thread is a complex routine of instructions that are platform-specific. Threads are managed by the OS kernel, so creating a thread involves creating system calls following that platform’s conventions.

LLVM draws a line here. There’s a limit to how much functionality LLVM can provide without itself becoming huge. Just think of the variety of platforms out there that it would have to support, from embedded systems to mobile to the different desktop OSs.

You know what the best part is about compiling to LLVM IR? We don’t have to write our own runtime library. C compiles to LLVM IR. Let’s just use C functions to bootstrap our runtime library and clang to link them in!

So which kinds of functions are present in our runtime library?

We aren’t just limited to the functions provided by C. We can write our own C functions and link them in using the techniques described in this post.

Here’s a quick sketch of the structure of an LLVM module (from the previous post). As the diagram shows, the part of the module we’re interested in is the function declarations. To use a C library function, we need to insert its function signature in our module’s function declarations symbol table. 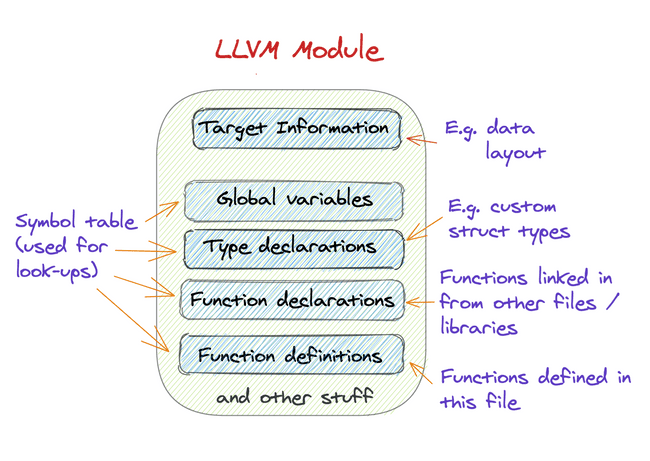 Let’s warm up with printf. The C function type signature is:

To translate this C type signature to an LLVM FunctionType:

And the corresponding code to call the printf function:

CreateGlobalStringPtr is a useful IRBuilder method that takes in a string and returns an i8* pointer (so we have a argument of the right type).

Each thread has its own stack. To share objects between threads, we’ll introduce a global heap of objects. We’ll use the stack to store primitives like ints, bools and to store pointers to objects on the heap. 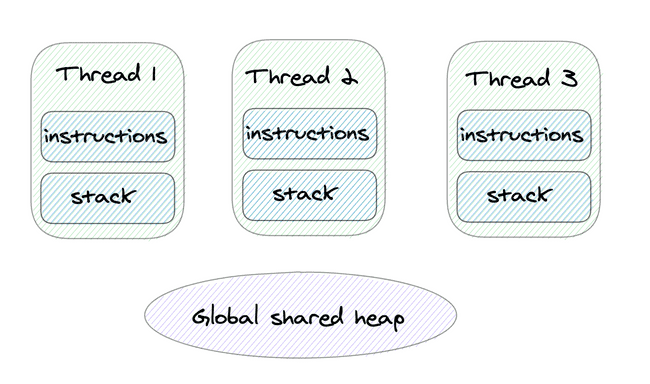 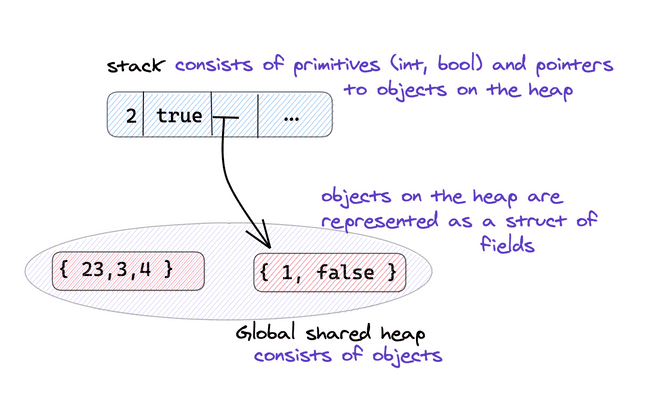 We can use malloc to allocate objects to the heap. (This is what C++‘s new keyword does under the hood!)

The type signature for malloc is as follows:

Converting this to the equivalent LLVM IR types, void * and size_t map to i8 * and i64. The LLVM API code falls out once you’ve determined the LLVM types.

There is just one issue though. When we create a struct on the heap, malloc requires us to specify the number of bytes we want to allocate. However the size of that struct is machine-specific information (it depends on the size of datatype, struct padding etc.). How do we do this in LLVM IR, which is machine-independent?

We can compute this through the following hack. We know that an array of structs of type Foo is just a contiguous block of memory. Pointers to adjacent indices are size(Foo) bytes apart. Therefore, if we start an array at address 0x0000 (the special NULL address) then the first index of the array is at address size(Foo). 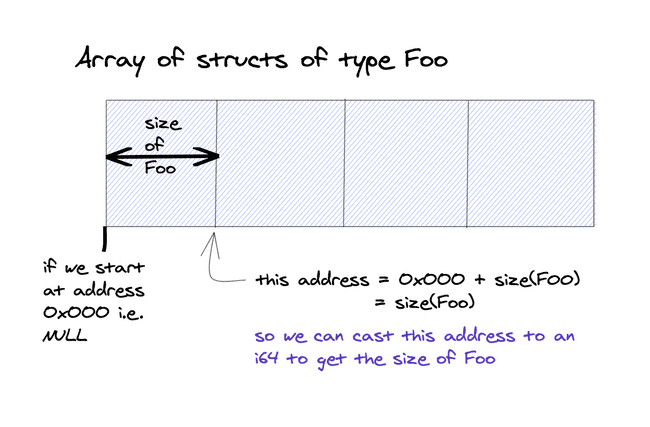 We can use the getelementptr (GEP) instruction to compute this array address, and pass in the base pointer of the array as the null value. You might be thinking, hold on, this array doesn’t exist. Won’t this cause a seg fault?

Remember, the role of the GEP instruction is just to calculate pointer offsets. Not to check if the resultant pointer is valid. Not to actually access the memory. Just to perform this calculation. No memory access = no seg fault.

We pass objSize to malloc. malloc returns a void * pointer, however since we will later want to access the struct’s fields, we need to cast the type to objType*. Remember, LLVM needs explicit types!

Swap out malloc for GC malloc. If we use GC_malloc, we get garbage collection for free! How cool is that?! We don’t need to free() our object.

If you want to implement your own garbage collector, check this LLVM page out.

The two functions we’d like to use to create and join threads are pthread_create and pthread_join. The linked Linux manual pages give a full description of the functions, but they are a bit dense.

Let’s unpack the relevant information, starting with the function signatures:

Both pthread_create and pthread_join are idiomatic C functions in that:

If you’re not familiar with C pointer syntax, void *(*start_routine) (void *) is quite a mouthful. This says start_routine is a pointer to a function that takes in a void * argument and returns a void * value. void * is the generic type representing any pointer (it’s super flexible - we can cast it to any type we’d like e.g. int * or Foo *).

pthread_create creates a thread, which will asynchronously execute the function pointed to by start_routine with the arg argument. The opaque pthread_t type represents a handle to a thread object (can think of it like a thread id ). We pass a pthread_t * pointer, and pthread_create will assign the pthread_t handle corresponding to the created thread to this object. The opaque pthread_attr_t type represents any attributes we want the thread to have. The pthread_attr_t * parameter lets us specify the attributes we want the created thread to have. Passing NULL will initialise the thread with default attributes, which is good enough for us.

We pass the pthread_t handle to pthread_join to tell it which thread we are joining (waiting on to finish). pthread_join updates the void ** pointer parameter with the void * return value of start_routine(arg) executing on that thread. We can pass NULL if we don’t want this return value.

Here’s an excellent minimal C example that demonstrates the use of Pthreads.

We’ve seen int and void * before: they may to i32 and i8*. void ** follows as i8*. We’re in a bit of a pickle with pthread_t and pthread_attr_t as their type definitions are opaque.

Aw shucks, we’re stuck. The solution (as with most cases when you’re stuck with LLVM IR) is to experiment in C and look at the compiled LLVM IR output.

We can compile that excellent minimal C example to LLVM IR using clang. The command to do this for a foo.c file is:

The Clang LLVM IR output is quite messy. The best way to read the output is to find the lines of LLVM IR that correspond to the interesting lines of code in the C program, and ignore the noise around them. More information about experimenting with C and C++ to understand LLVM IR in this excellent Reddit comment.

For us, the interesting lines are those that allocate a pthread_t stack variable, and the pthread_create and pthread_join calls:

If we match up our type definitions for the functions:

Great, we’ve determined pthread_t is a pointer to a struct of type %struct._opaque_pthread_t. What’s the type of this struct? Let’s look at the type definitions defined earlier in the file:

Yikes, this is a mess. Here’s the thing. We don’t have to declare the internals of the struct because we aren’t using them in our program. So just as %struct.__sFILEX was defined as an opaque struct above, we can define our own opaque structs. The pthread library’s files will specify the bodies of the struct types as it actually manipulates their internals.

The eagle-eyed amongst you might notice these struct names don’t match the names in the file e.g. struct_pthread_t vs struct._opaque_pthread_t. What gives?

LLVM’s types are resolved structurally not by name. So even if our program has two separate structs Foo and Bar, if the types of their fields are the same, LLVM will treat them the same. The name doesn’t matter - we can use one in place of the other without any errors:

It turns out we can exploit the structural nature of LLVM’s type system to simplify our types further.

Let’s look at pthread_t next. We know that pthread_t is a pointer to some opaque struct, but we never access that struct anywhere in our program. In fact, the only place pthread_t’s type matters is when we’re allocating memory on the stack for it - we need to know the type to know how many bytes to allocate.

Here’s the thing: all pointers have the same size, regardless of type, as they all store memory addresses. So we can use a generic pointer type void * for pthread_t too.

The LLVM API code to declare the pthread_create and pthread_join functions is therefore as follows:

Linking in the Runtime Library

We can use clang to link in the libraries when we compile our foo.ll file to a ./foo executable.

We link in pthread with the -pthread flag.

To link GC_malloc we need to do two things:

We’ve seen 3 examples of C functions used when bootstrapping our runtime library: printf, malloc and the pthread API. The generic approach (can skip steps 2 - 4 if you already understand the function)

Bolt uses the finish-async construct for concurrency. The async keyword spawns (creates) a thread and sets it to execute the expressions in that async block. The finish block scopes the lifetime of any threads spawned inside it using the async keyword - so all spawned threads must join at the end of the block. This way we’ve clearly defined the lifetime of our threads to be that of the finish block.

When inside our async block, we can access any objects in scope at the start of the finish block (before the async thread was spawned). For example:

The first step is to compute the free variables that need to be copied across to the new stack. Here’s a link to the code if you’re interested; we’ll skip the details as it’s quite mechanical. Link to the previous post on desugaring if you want to look back at the desugaring stage.

Converting the Async Block into a Function Call

Now we need to somehow convert this expression into a function that pthread_create can run.

However, this doesn’t match the argument type we’re looking for: asyncFun can only take a single void* argument.

The solution: create a single struct that contains all of the values. We can cast the struct * to and from a void * pointer to match types.

We need to unpack this inside the function:

Finally, having defined our arg and our async function, we can invoke pthread_create.

The high-level structure of this is as follows:

We join each of the pthread_t handles for each of the async expressions’ threads.
As we mentioned earlier, we aren’t returning anything from the asyncFun, so we can pass in NULL as the second argument:

Now we’ve talked about how we create threads and how we join threads, we can give the overall code generation for the finish-async concurrency construct:

In this post, we’ve looked at the role of a runtime library and how we can bootstrap our Bolt runtime with C functions. We looked at a generic way of adding C function declarations to our modules, and then link them with our compiled .ll file. I’d encourage you to add further C function to the runtime library. e.g. scanf to go with our printf function.

The second half of this post was a deep-dive into how Bolt does concurrency. We’ve used pthread to spawn a hardware thread for each async expression. An extension might be to use a thread pool instead!