I started a YouTube channel 3 weeks ago. I probably should’ve written this post then but hey ho! I’ve posted 4 videos so far, and I’ve committed to posting weekly videos on the channel for the forseeable future. Who knows how it’s going to turn out? So I thought it’d be fun to document the journey.

I’ve never edited videos before this, so there’s a lot to learn! I’ve been writing blog posts for a couple of years now, but haven’t put myself in front of the camera before. It took me a month of should-I-shouldn’t-I, until I decided to get over this initial hesitancy by publicly committing in my email newsletter. I’m hoping in due course it’ll feel pretty natural posting YouTube videos.

Why YouTube? It’s a different medium, and I personally learn best from videos! So although it’s a lot more effort to publish a video than to write a post, I’m hoping they’ll be more useful.

Pragmatically, there’s also the benefit of the network effects present on YouTube, and that it’s much lower-friction to subscribe to a YouTube channel than it is signing up to an email newsletter. At the time of writing, since SEO isn’t so good for the blog, you probably found this because you’re my friend (hey!) or you followed a link from Twitter and/or Reddit.

I think that it’s going to take a while to grow, and it’s just a matter of persisting until the vanity metrics pick up. I was tempted to post 2x a week, but each video takes 20 hours or so to script, film and edit, and I have a degree to do too! So for now, I’m collecting a couple of nice comments to keep me going!

A month in, I’m now on 52 subscribers, and have crossed 1000 minutes watch time, which means YouTube Studio shows my watch time in terms of hours instead of minutes. Small wins, given I’m nowhere near thinking about 1000 subs and 4000 watch hours. Posted about my channel on LinkedIn, but made little difference really (gained 3 subs?).

Over the last couple of days, I’ve noticed an uptick in views and impressions. YouTube has started suggesting my Federated Learning video after other videos. It’s probably pretty low down the list to start off with, but it’s a milestone. FWIW, Google Search took ages to start ranking my blog. 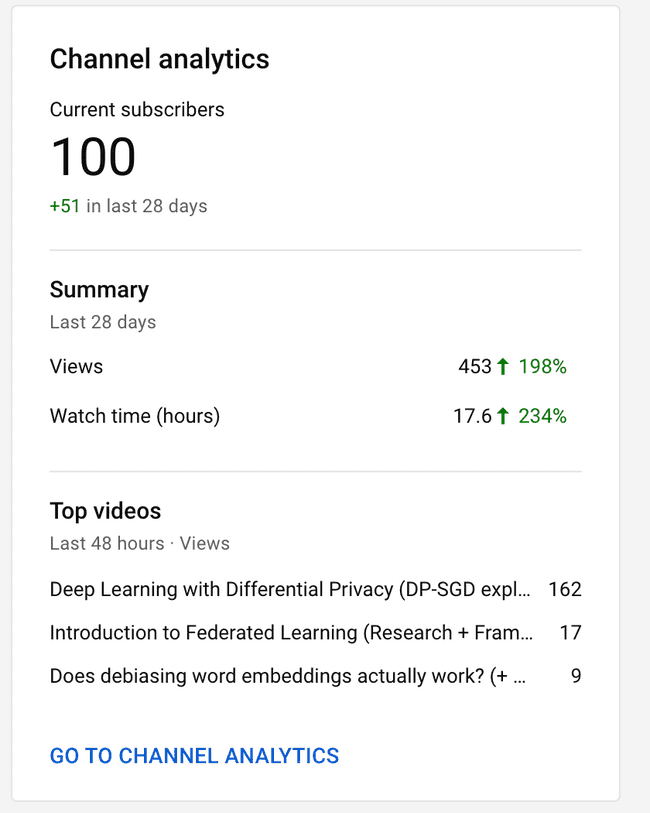 Frankly I expected this to take another month. This is purely down to the incredibly generous endorsement from Neil Lawrence. This one tweet skyrocketed me from 60 subs to about 110 in the space of a day (+ 80 new Twitter followers). Way too kind of him! Now to double down, and try to produce more content people find valuable enough to share :)

Since the last update my federated learning video seems to be a slow burner, gaining a few subs a day getting me to just over 200 subs by 13th April.

I recently released a video on My 5 Year ML Journey that’s an order of magnitude better than the rest - my first “proper” YouTube video, with a focus on storytelling rather than technical content. I got feedback from a friend that I should smile more in my videos, so this video is one where my personality shines through more :)

This was one of those videos where making it I just felt it would do much better than my previous videos because it was such a step up. And it’s #1 on r/learnmachinelearning. 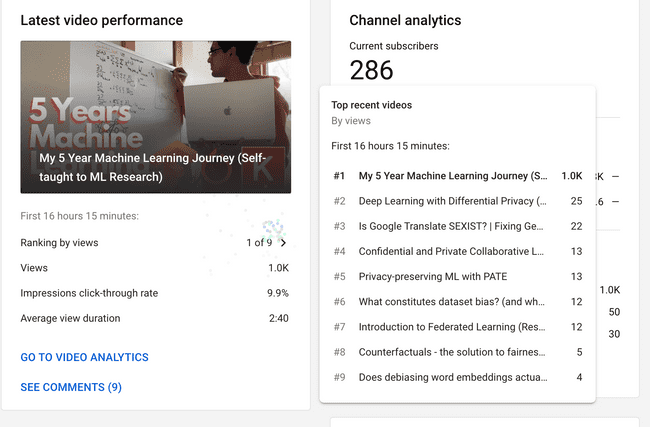 But the real reason I love this video? Growth. No, not in the sense of subscribers, although I did rocket from around 200 to 330. No, growth in terms of skill. I had a blast trying to improve my editing skills and reduce that “taste gap (what I aspire to be making vs what I can currently make). We’re getting there! The future plan for the channel is to keep creating content that just stretches me a bit. And then, every once in a while, really pushing the boundaries!

I guess so long as I’m loving the content I put out, the channel will steadily grow.

We’re now 4 months and 483 subs in, and I’ve spent the last few weeks working on my dissertation so haven’t had time to prioritise the channel. However, I now have a month free now, so all that is set to change! I recently bought an inexpensive lavalier mic and tripod for my channel to improve the audio and get better shots now I don’t have to prop my phone up with my headphone case and books!

As I detailed in my update video, and more thoroughly in my newsletter, I have been reflecting on the direction of this channel. And I’ve decided it needs a shake-up to really kickstart it! Go check the newsletter out for the reasons, I think I’ll be sharing more on there from now on.